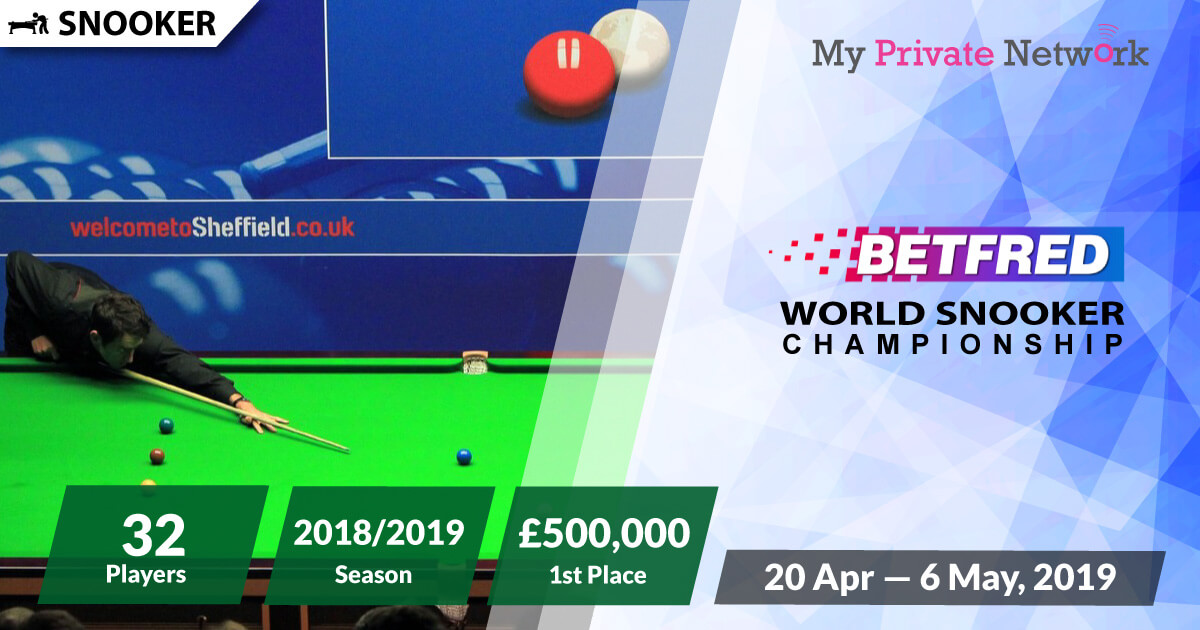 Update: 7 May 2019, Tuesday
Congratulations to Judd Trump for winning the 2019 World Snooker Championship! Read more about it here from The Guardian. We’ll see you folks back here again next year.

The 2019 Betfred World Snooker Championship begins from 20 April to 6 May in Sheffield, England at 1000GMT.

Qualifying rounds are starting on 10 to 17 April at the English Institute of Sports also in Sheffield and will be contested by 128 unseeded players. The best 16 unseeded players will then advance to the main draw to go up against the seeded 16 players.

Live coverage will be available through BBC and Eurosport (UK), and Facebook Live (Americas and Asia). Here are the match coverage breakdown for the different countries:

If you’re not currently in your local country or any other country offering the World Snooker Championship stream, then you’ll need to connect to a VPN first before streaming the matches from your usual providers.

2) Install the VPN on any device that you’ll be using to watch the 2019 World Snooker Championship.

3) Ensure that you connect to the appropriate country VPN server that is supported by the provider. For example, connect to U.K for BBC.

Don’t Have a VPN yet? Sign up now by clicking the button below for unlimited access to both VPN and SmartDNS services.

Watch all live World Snooker Championship games from BBC for free. Whilst BBC doesn’t charge for their content, you’ll still need a BBC account to access them. Learn how to sign up for free here.
Commentary: English
Availability: UK only – Connect to the UK VPN servers first before starting the stream!

2) Search for the live stream and start watching to the tournament!

Watch all live World Snooker Championship games including the qualifying rounds from Eurosport. However, you’ll need a paid subscription with them to watch the games live.
Commentary: English
Availability: UK only – Connect to the UK VPN servers first before starting the stream!

As a bonus, World Snooker has made live stream available via Facebook Live in selected territories in the Americas and Asia. You’ll need to be in the appropriate countries to access them. Check country list here

2) The live stream should be become available when the tournament starts. Be sure to follow them to get a notification!

Don’t Have a VPN yet? Sign up now by clicking the button below for unlimited access to both a VPN and SmartDNS services.

We hope you found this article informative and useful. Please feel free to share it with your friends or family that want to watch the World Snooker Championship too!